Ambassador KITAOKA had a meeting with Mr. VALLASTE, President of Estonia-Japan Association & Ms. FUNK, so much devoted to Estonia-Japan friendship 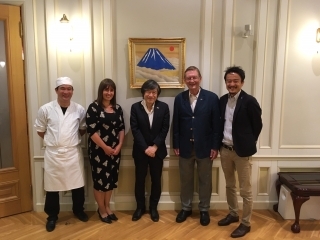 Together with the two guests
On 26th August, Ambassador KITAOKA invited to his residence, Mr. Heikki VALLASTE, President of Estonia-Japan Association, and Ms. Janne FUNK, who has been promoting the Estonia-Japan friendship in various manners, and hosted dinner.
From the Embassy, Mr. Toshifumi ITO, a Second Secretary in charge of culture and public relations accompanied.
The participants sat at a dining room, fully ventilated, and each participant took a seat keeping distance with each other.
Mr. VALLASTE worked for the Estonian Foreign Ministry just after the recovery of Estonian independence, and took office of the first Chargé d’Affaires at the Estonian Embassy in Japan from 1996 to 1998.
In 2015, his distinguished contribution to the Estonia-Japan friendship was recognized, and he received the Order of the Rising Sun, 3rd Class Gold Rays with Neck Ribbon.
And Ms. FUNK, after working for the Japanese Embassy in Estonia from 1994 to 1995, went to Japan to study at Senshu University and The Japan Foundation Japanese-Language Institute.
By making the best use of her distinguished Japanese linguistic capability, she has been contributing a lot to the Estonia-Japan friendship by supporting the activities of Jaapani Kultuuri Koda (Japanese Cultural Society in Estonia), and as a translator, an interpreter and a tour guide. Nowadays, she has mainly been involved in supporting Estonian companies for entering Japanese market.
Actually, the Ambassador worked for the Japanese Embassy in Finland as the Deputy Head of the Mission 26 years ago, and he sometimes came to Estonia to support the Japanese Embassy there, where only the Chargé d’Affaires was stationing.
And when he first came to Estonia, it was Ms. Funk, working for the Japanese Embassy, who guided the Ambassador around Tallinn!
All the participants enjoyed conversations over the authentic Japanese cuisine, cooked by Mr. Takaaki ARAI, the official chef of the Ambassador, who recently received “2021 Foreign Minister’s Commendation as Excellent Executive Chef for Ambassador of Japan”.
The dinner this time turned out to be a very precious occasion for the Ambassador to learn the Estonia-Japan relationship which he did not know, dating back to 30 years ago, when the Estonian independence was recovered.
The Ambassador would like to express his sincerest gratitude to Mr. VALLASTE and Ms. FUNK for kindly accepting his invitation!