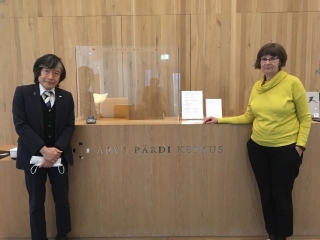 Together with Ms. KIVILO 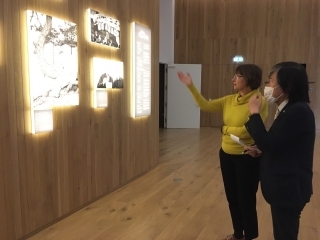 Guided tour by Ms. KIVILO
On 25th October, Ambassador Hajime KITAOKA visited “Arvo PÄRT Center”, preserving the musical heritage of this great composer, representing the Estonian music.
He was escorted by Mr. Toshifumi ITO, a Second Secretary in charge of culture and public relations in the Japanese Embassy.
This visit has materialized, following the recommendation by Prof. Toomas ASSER, Rector of Tartu University, who is one of the most important Estonian friends for the Ambassador.
PÄRT is a world famous composer, whose works are played most frequently among the works by all the existing composers.
In 2014, he received “Premium Imperiale in honor of Prince TAKAMATSU”.
In 45 minutes from Tallinn, the Capital City, the car started getting deep into the forest, which looks like “ok, this is Estonia!”.
And all of a sudden, modern architecture with pure white color emerged in front!
The Ambassador was welcomed by Ms. Anu KIVILO, Managing Director, who guided him into the Center, where the church is located at the center, around which, exhibitions, the concert hall and the library are arranged.
The Ambassador listened to the explanation given by Ms. KIVILO to learn a lot.
PÄRT discovered a new style of composition named “tintinnabuli (a small bell)”, and based on that, he composed many pieces of music, which have come to express the Christian faith, not only limited to Russian Orthodox, but also open to Greek Orthodox, Catholic or Protestant.
His music has also succeeded in expressing his personal approach to world, silence, sound, and even to truth and beauty.
Why has his music come to be accepted by so many peoples in so many countries?
Now the Ambassador started getting a glimpse of the secret of PÄRT’s music, which made this visit so precious as a highlight of his stay in Estonia!
The Ambassador learned that the foundation of PÄRT has been accepting a small number of scholarship students for creative arts from all over the world annually, and said “I wish Japanese students could come to be accepted someday in future”.
He would like to express his sincerest gratitude to Ms. KIVILO for welcoming him in such a cordial manner under COVID19!