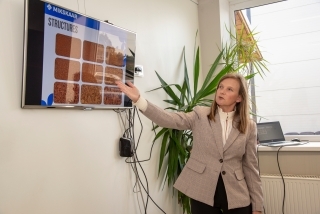 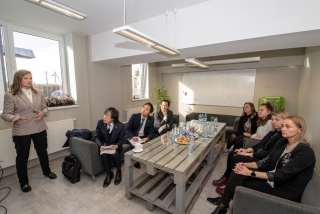 Presentation by Ms. TOMBAK, CEO(2)
On 6th October, Ambassador Hajime KITAOKA made his 5th official visit to Viljandi City, known as “Culture City”, located in the Southern Estonia.
He was escorted by Mr. Tomoya SHIGENARI, a Second Secretary in charge of economic affairs in the Japanese Embassy.

After finishing his meeting with Mr. TIMPSON, the Mayor, the Ambassador was joined by Mr. Tsubasa YOSHITO, Project Manager of the Enterprise Estonia, a governmental organization.
After lunch with him, the Ambassador visited “Mikskaar”, a local enterprise with the kind arrangement by Mr. YOSHITO.
“Mikskaar”, which was set up in 1997, is one of the biggest manufacturers of peat in Estonia, and 99% of its products are exported.
Estonia, where 22% of its land is coveted by bog, is so rich in very high quality of peat.
The distinguished character of “Mikskaar” is that it is capable of manufacturing and selling the products, matching the needs of its customers in such a flexible manner.
It has started exporting into the Japanese market in 2005, and its products of white peat, which is fine with white color to match the needs of the Japanese customers have been accepted so well by Japan.
The Ambassador’s visit started with the briefing given by Ms. Kristel TOMBAK, CEO, at the conference room.
Ms. Mariliis TIGASING, COO, Ms. Helen LUSIS, Factory Manager, Ms. Mare KAIGAS, Sales Manager and Ms. Irene Isabel MILEIKO, Office Manager also attended.
The briefing was followed by the guided tour into their factory.
The Ambassador was impressed by a large amount of products stored in such an organized manner, every sample of products stored, and the quality of each product strictly checked every day!
He highly acclaimed the factory saying “this meticulous way of manufacturing looks as if it is for a food factory! Indeed, you are manufacturing food for plants”.
He also wished for their further promotion of exports to Japan.
Ms. TOMBAK expressed her gratitude to Mr. YOSHITO, saying “I greatly appreciate his generous support for our communication with Japan”.
The Ambassador would like to express his sincerest gratitude to “Mikskaar” headed by Ms. TOMBAK, who accepted him in such a cordial manner under COVID19, and to Mr. YOSHITO for arranging such a fruitful visit! 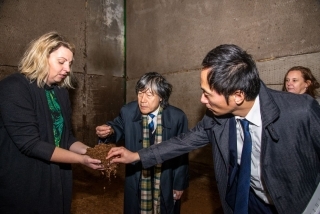 Feeling the texture of the peat used for the products 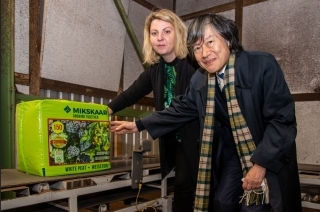 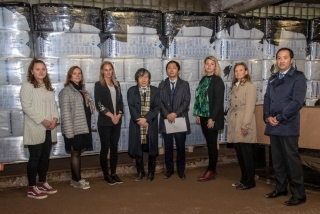 Group photo in front of products