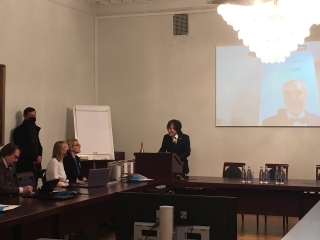 Opening remarks by the Ambassador 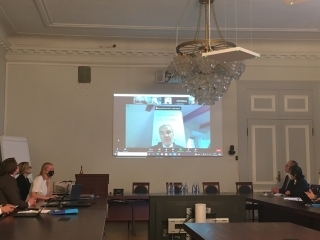 Online speech by H.E. Mr. Väino REINART, the Ambassador of Estonia to Japan
From 13th to 14th October, Ambassador Hajime KITAOKA made his 10th official visit to Tartu, the center of the Southern Estonia.
He was escorted by Mr. Toshifumi ITO, a Second Secretary in charge of culture and public relations in the Japanese Embassy.

On 14th, the Ambassador, who stayed overnight in Tartu, revisited Tartu University with Mr. ITO, to attend the “Multidisciplinary Conference on the Economic Relations and Embedded Cultural Perspective between EU and Japan”, two days international conference, hosted by Asia Center of Tartu University, and delivered a speech.
The conference was opened by Dr. Ero SÜLD, the Director of the Center, inviting Prof. Toomas ASSER, the Rector of Tartu University, who made inaugural remarks.
It was followed by a speech by H.E. Mr. Väino REINART, the Ambassador of Estonia to Japan, who attended on-line.
Then Ambassador KITAOA delivered a speech, saying “in economic relations, especially in the international economic relations, to understand your partner comes to be very important. It is accompanied by so many difficulties, and the shortest cut to overcome them is to understand your partner’s culture. From that point of view, this Conference’s challenge to deal with both economic relations and culture, existing behind them, is very precious. I sincerely wish that the fruits of this Conference could be shared by many to get to the further promotion of EU-Japan economic relations”.
It was followed by Keynote by Prof. Seijiro TAKESHITA of Shizuoka University, who attended on-line and kicked off the Panels.
In Panel 1, following the speech by Prof. Ari KOKKO of Copenhagen Business School, discussions are made by Prof. KOKKO, Prof. TAKESHITA, and Prof. Urmas VARBLANE of Tartu University under the moderation by Prof. Duncan McCARGO of University of Copenhagen.
After the lunch break, Panel 2 started with the speeches delivered by Mr. Yoshito TSUBASA, Project Manager (in charge of Japan) of the Enterprise Estonia, Ms. Janne FUNK of Kirimiri Ltd., who has the career of more than 20 years to bridge between Estonian and Japan, and Mr. Ott JALAKAS, co-founder of Lingvist.
Panel1, comprising professors, who are authorities of each field, has become very academic.
While Panel 2, comprising veteran practitioners, has become very pragmatic.
The arrangement of Asia Center to make the contrast between those two panels was just wonderful, and impressed the Ambassador a lot!
This conference continued to 16th, but the Ambassador bid farewell to the participants and left Tartu to go back to Tallinn, the Capital City.
For the Ambassador, this turned out to be a very pleasant occasion to be able to witness another contribution to Estonia-Japan relations and EU-Japan relations by Asia Center, to which the Ambassador awarded his Commendation one day before on 13th!
He would like to express his sincerest gratitude to Asia Center headed by Dr. SÜLD for inviting him and giving him a chance for a speech! 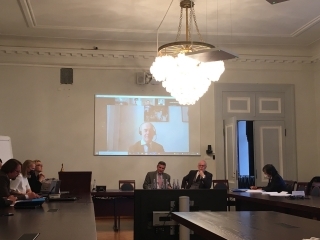 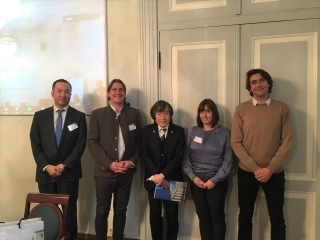 Together with the panelists in Panel 2