Ambassador KITAOKA made his 10th official visit to Tartu, the center of the Southern Estonia (4th Instalment: Ambassador’s speech at “JAPAN Film Festival”) 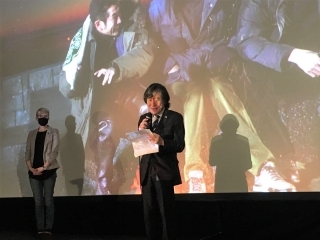 The Ambassador delivered a speech 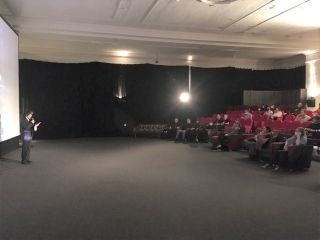 JAPAN Film Festival hosted by NPO “Japanese Culture Club Asashio” with the support of “JAPAN FOUNDATION”
From 13th to 14th October, Ambassador Hajime KITAOKA made his 10th official visit to Tartu, the center of the Southern Estonia.
He was escorted by Mr. Toshifumi ITO, a Second Secretary in charge of culture and public relations in the Japanese Embassy.

The Ambassador, after finishing “Commemorative Lecture of the 100 years of Friendship between Estonia and Japan”, moved to Tartu Elektriteater to attend “JAPAN Film Festival”, which was hosted by NPO “Japanese Culture Club Asashio” with the support of “JAPAN FOUNDATION”, to deliver a speech before the showing of the film for that evening.
“Asashio” is NPO, which was founded in 2005 by Ms. Kaia JALLAI, its President.
On 4th February last year at the Japanese Ambassador’s residence, “Asashio” was awarded “Certificate of Commendation” by the Japanese Foreign Minister (see our web and Facebook on that date for details).

The film, shown in that evening, is entitled “Another World” directed by Mr. Junji SAKAMOTO, and it is one of the most favorite films for the Ambassador!
Prior to the film showing, he said, “this is a story of rivalry between “globalism”, which has now become so fashionable all over the world, and traditional “localism”. Can you truly say “I know the world!” simply because you went abroad or lived abroad?  One of the heroes of this film lived whole of his life in his hometown since he was born there, and inherited his father’s profession, charcoal making, engaged in that very seriously. His remarks “my side is also the world” sound in such a significant manner.  Among the audience tonight, there might be those who have rich international experience. And there might also be those who have continuously lived in their birth places. This film is worth watching for both of them. This film was so impressive for me. I sincerely wish that could be the case for all of you, who so kindly gathered here together”.

Congratulations, President JALLAI-san, for the success of the “JAPAN Film Festival” under COVID19!
And please accept the Ambassador’s sincerest gratitude for introducing a beautiful Japanese film again!