Ambassador KITAOKA made his 10th official visit to Tartu, the center of the Southern Estonia (3rd Instalment: “Ambassador’s Commendation”, awarded to Asia Center of Tartu University) 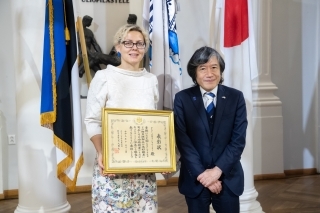 Together with Dr. Elo SÜLD, Head of the Asian Centre 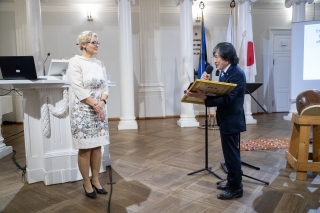 Reading out the Commendation
From 13th to 14th October, Ambassador Hajime KITAOKA made his 10th official visit to Tartu, the center of the Southern Estonia.
He was escorted by Mr. Toshifumi ITO, a Second Secretary in charge of culture and public relations in the Japanese Embassy.

On 13th, after delivering “Commemorative Lecture of the 100 years of Friendship between Estonia and Japan”, the Ambassador awarded “Ambassador’s Commendation” to the Asia Center of Tartu University at its big hall, with the attendance of the University Rector, Toomas ASSER.
The Ambassador highly acclaimed the Center for deepening the Estonians’ understanding on Japan through numerous seminars or symposiums, for working over the Estonian Government to create the Asian Strategy, for setting up master course on Asian studies etc.
He said “I sincerely wish the relationship between the Center and the Japanese Embassy could be promoted further in future”, and handed over the “Ambassador’s Commendation” to Dr. Elo SÜLD, Head of the Centre, reading out the Commendation both in Japanese and English.
Dr. SÜLD introduced that the Center’s activities have been so well supported by Tartu University, Enterprise Estonia, the Foreign Ministry of Estonia, and its Education Ministry.
She finally responded that “I also would like to strengthen the relationship with the Japanese Embassy in future”.
It was followed by a photo session, and the award ceremony finished in very much a friendly manner!
Since his arrival in Estonia, the Ambassador has always been paying his utmost respect to the Asia Center, and eventually he could show his respect by the award ceremony, which has become such a pleasant moment for him!