Top > Ambassador KITAOKA made his 10th official visit to Tartu, the center of the Southern Estonia (2nd Instalment: “Commemorative Lecture of the 100 years of Friendship between Estonia & Japan”at the Tartu University)

Ambassador KITAOKA made his 10th official visit to Tartu, the center of the Southern Estonia (2nd Instalment: “Commemorative Lecture of the 100 years of Friendship between Estonia & Japan”at the Tartu University) 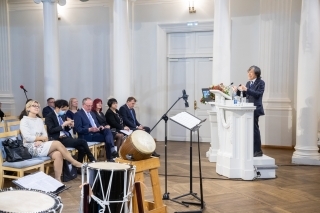 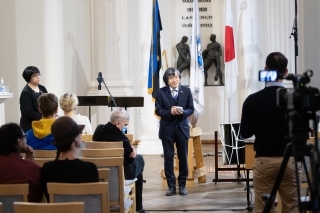 The lively question and answer session
From 13th to 14th October, Ambassador Hajime KITAOKA made his 10th official visit to Tartu, the center of the Southern Estonia.
He was escorted by Mr. Toshifumi ITO, a Second Secretary in charge of culture and public relations in the Japanese Embassy.

On 13th, after his lecture at Jaan Poska Gymnasium, the Ambassador visited Tartu University.
This has marked his 5th official visit to the University.
After the arrival, the Ambassador was guided into a big lecture hall to be welcomed by Prof. Toomas ASSER, the Rector, Dr. Elo SÜLD, Head of the Asia Centre, Ms. Ene SELART in charge of Japan in the Center, and Dr. Eva LIIAS, the predecessor of Ms. SELART.
The visit started with Prof. ASSER’s warm welcoming remarks saying “I would like to express my gratitude to the Ambassador for visiting our University so frequently”.
It was followed by the Ambassador’s “Commemorative Lecture of the 100 years of Friendship between Estonia and Japan”, addressed to 100 audience, comprising the Rector and lecturers of the University, its students, businessmen etc.
He, by using the power point presentation, discussed the Japanese geography which has created the diversity of Japan, its history created by that diversity, the importance of digitization to find a breakthrough in stagnant Japanese economy, the importance of the friendship between Estonia and Japan for that breakthrough etc. together with his episode on Tallinn, which he visited 25 years ago.
Finally, he said, “The next 100 years has a wonderful momentum to deepen our bilateral relationship, far deeper than that in the last 100 years”.
He finished his presentation, expressing his sincerest expectation for the future relationship between Estonia and Japan.
After the lively question and answer session, an exciting concert was waiting.
Such a heated collaboration of “Muteki Taiko” led by Ms. Helle-Riin UIB, and Ms. Mizuki SHINDO, a Japanese flutist, so active in Estonia, was so rich in Japanese atmosphere, and thoroughly charmed the audience!

Recalling the Ambassador’s stay in Estonia, time flies indeed.
Already 2 years have passed since his first visit on 17th October 2019, to pay courtesy call to the Rector ASSER and to visit the Asia Center.
For the Ambassador, this visit has come just before his departure, and thus, it has become such a precious and unforgettable occasion to be able to deliver Commemorative Lecture in Tartu University, which is full of wonderful memories!
The Ambassador would like to express his sincerest gratitude to Tartu University headed by the Rector ASSER, who so kindly gave a chance for Commemorative Lecture under COVID19, and to all the audience, who so kindly gathered! 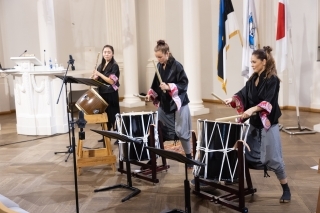 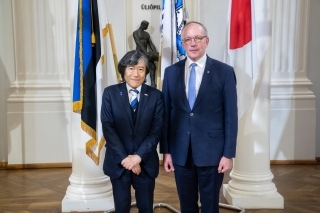 Together with the Rector