Top > Ambassador KITAOKA made his 11th (final) official visit to Tartu, the center of the Southern Estonia (1st Instalment: Cyber Battle of Estonia 2021)

Ambassador KITAOKA made his 11th (final) official visit to Tartu, the center of the Southern Estonia (1st Instalment: Cyber Battle of Estonia 2021) 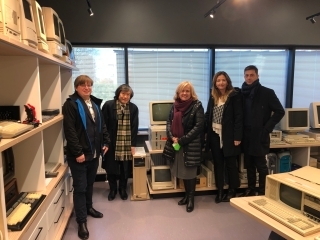 The visit to Computer Museum 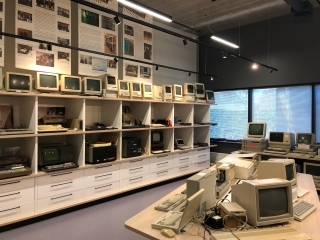 Many computers played the leading role in the construction of “digital state, Estonia”
On 30th October, Ambassador Hajime KITAOKA made his 11th (final) official visit to Tartu, the center of the Southern Estonia.
This visit has got materialized with the kind invitation by Mr. Rainer SAKS, Member of the Management Board of “CybExer Technologies”, and the purpose of the visit is to participate in “Cyber Battle of Estonia 2021”, which is hosted by “CTF TECH”, cooperating with “CybExer Technologies”.
This “Battle” is targeting the Estonian youngsters aged between 15 and 21, who come up as teams to defend themselves against the attacks made by hackers, organized by “CTF TECH”, in fictional cyber space, where teams are competing against each other by their defense performances.
On this day, here in Tartu, the final match of the “Battle” was fought at the Sports Hall of Tartu University for 8 hours from morning to evening, among the teams, which have won the preliminary matches, which took place in various cities.
The Ambassador left Tallinn, the capital city, in the morning, and attended the lunch hosted by Mr. SAKS at s restaurant in Tartu.
The Ambassador learned a lot from Mr. SAKS and Dr. Lucie KADLECOVA, the representative of “CybExer Technologies” in Czech Republic on cyber security or the on-going project of “Tallinn Manual 3.0”.
It was followed by the visit to Computer Museum of Tartu University.
Many computers including the one used by Mr. Mart LAAR, who played the leading role in the construction of “digital state, Estonia” as the Prime Minister, are exhibited.
This visit was precious for the Ambassador to understand the development of computers, the basis of digitization, and how they are accepted by the Estonian society.
Then he moved to the Sports Hall of Tartu University, to be guided into the “Battlefield”, which was full of enthusiasm of youngsters, making their defense against the attacks in cyber space.
When the dead line of 4:15pm is approaching, count-down started on the big screen in the Hall, which heightened the tension in the Hall even further!
Eventually, the 1st prize was won by “Forkbomb” from Tallinn, followed by “Moomin Trolls” also from Tallinn, and “RM Hints” from Tartu, all of them were commended by the President KARIS, who came to Tartu from Tallinn.
The Ambassador reconfirmed the importance of cyber space for Estonia, which made his last visit to Tallinn very precious.
He would like to express his sincerest gratitude to Mr. SAKS for his kind invitation! 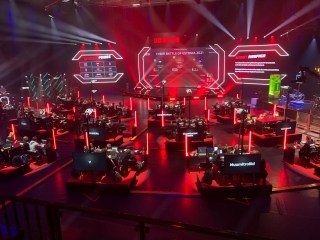 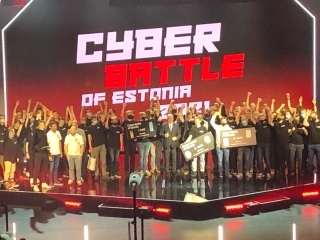 The commendations by the President KARIS