Ambassador KITAOKA had a meeting with Mrs. Helen UUS, who has been making contributions to the Estonia-Japan friendship 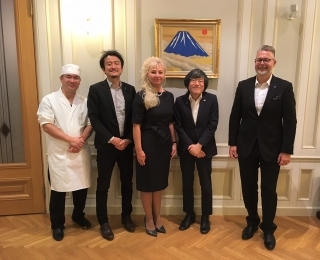 Together with Mr. and Mrs. UUS 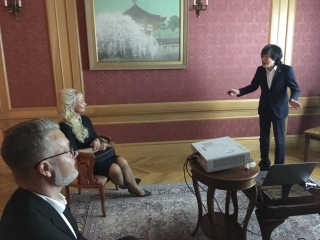 Presentation by the Ambassador
On 28th September, Ambassador KITAOKA invited to his residence Mrs. Helen UUS, Representative of “Diplomatic Relations Project MTÜ”, which has been supporting extensively the diplomatic activities of foreign countries not limited to Japan.
This contribution has eventually led to the “Educational Friend of the Year 2020”, awarded by the Estonian Ministry of Education and Science in October 2020.
Mrs. UUS has made the best use of her wide human network to make various arrangements, which have supported a lot the diplomatic activities of the Japanese Embassy since Ambassador took his office 2 years ago.
The Ambassador has been wishing to express his gratitude to her for long, and it has materialized eventually!
From the Embassy, Mr. Toshifumi ITO, a Second Secretary in charge of culture and public relations accompanied.
The arrangements so kindly made by Mrs. UUS are so much wide ranged from the strengthening of the relationship with municipalities, the promotion of cultural relationship to the strengthening of the business relationship through visits to private enterprises.
Those arrangements are truly numerous, including the Ambassador’s 1st visit to Paldiski, his visit to Viimsi gymnasium with a meeting with the Foreign Minister Reinsalu (at that time), his visit to the home of H.E. Ms. Ojuland, a former Foreign Minister, to have a meeting, and the strengthening of the business relationship though a visit to Dynomax etc.
And her husband, Andrus, a known engineer, has supported his wife’s activities from behind so well.
Those activities have been highlighted often in the Japanese Embassy’s Facebook and Homepage, while contributing a lot to deepen the bilateral relationship between Estonia and Japan.
The meeting started with the Ambassador’s power point presentation entitled, “Japan and Emperor”.
A dinner followed in a dining room, fully ventilated, and each participant took a seat keeping distance with each other.
All the participants enjoyed conversations over the authentic Japanese cuisine, cooked by Mr. Takaaki ARAI, the official chef of the Ambassador, who recently received “2021 Foreign Minister’s Commendation as Excellent Executive Chef for Ambassador of Japan”.

To Mrs. Hellen and Andrus UUS,
Ambassador KITAOKA, hereby, would like to express his sincerest gratitude for their distinguished contribution to the Estonia-Japan relationship on behalf of the Japanese Embassy and the Government of Japan, wishing for their continued support!