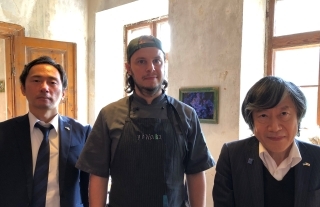 Together with Mr. TOMIK, a chef of the restaurant “Põhjaka” 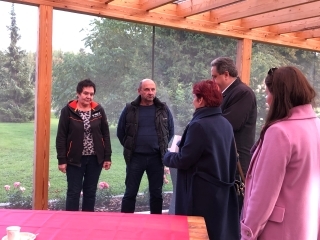 Mr. and Mrs. KUUTOK of Takkasaare Farm
From 21st to 22nd September, Ambassador KITAOKA, with the invitation of the Ministry of Rural Affairs, joined a study tour to inspect the agriculture in Estonia.
He was accompanied by Mr. Tomoya SHIGENARI, a Second Secretary in charge of economic affairs in the Japanese Embassy.
On the 2nd day of the tour, after visiting “E-Piim”, the participants headed for the north west for 30 minutes to get to Paide, located at the center of Estonia, to enjoy lunch at the restaurant “Põhjaka”.
This was opened in 2010 by Mr. Ott TOMIK, a chef, who spent 3 years to renovate an old manor house of 19th century cooperating with his colleague chef.
The participants thoroughly enjoyed the combination of the interior, wearing rich country atmosphere, the cuisine cooked by the fresh ingredients from the home farm, Estonian black bread so famous for its delicious taste, and wine!
Thereafter, the participants headed for the south for their final destination, Takkasaare Farm, located at Türi in Järva County.
This is a family farm run by Mr. and Mrs. Arvo KUUTOK and their son, which is producing dairy products by 200 cattle, and was awarded “Best Production Farm 2019”.
Ambassador KITAOKA paid his courtesy call to cows with the other participants.
He was very much impressed by the Farm with such modern equipment, which is rare for a family farm, and its production paying the due attention to the environment!
After finishing the final visit, the participants headed for the north for their way back to Tallinn, the Capital City.

The tour this time was arranged in such a balanced manner to include the visits both to big and small facilities, which succeeded in demonstrating the Estonian enterprising spirit, its emphasis on technology and utmost efficiency, regardless of the size of the facilities, to Ambassador KITAOKA, which has made this tour very precious occasion for him to feel the huge potential of the Estonian dairy production!
He would like to express his sincerest gratitude to Ms. SARON, Secretary General, Mr. TIIDEMANN, Deputy Secretary General and all the others of the Ministry of Rural Affairs! 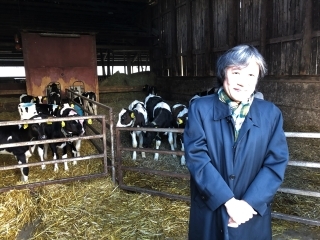 Together with the cattle in Takkasaare Farm