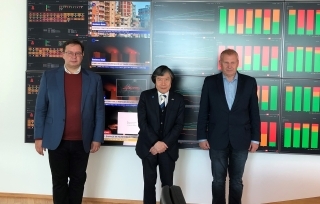 Together with Mr. ALMANN and Mr. SAKS
On 9th September, Ambassador Hajime KITAOKA visited “CybExer Technologies”, which conducts various exercises to counter cyber attacks, both for governmental organizations and private companies.
He has been briefed on the specific contents of those exercises, and discussed on the possibilities of providing Japanese governmental organizations and private companies with their exercises.
Ambassador KITAOKA was welcomed by Mr. Rainer SAKS, Member of the Management Board, and Mr. Lauri ALMANN, Member of the Executive Board, and their presentation was given to the Ambassador with pictures and films displayed on the big screen of their conference room.
In spring in 2007, Estonia faced “Bronze Soldier Crisis”.
This is remembered as the 1st cyber attack, made by a country against another country, which heralded the following hybrid warfare to be waged against Georgia (2008) and Ukraine (2014).
Mr. SAKS, together with the Ambassador, made a great contribution to the promotion of friendship between Estonia and Japan, and also had experience of dealing with the “Bronze Soldier Crisis” at the Estonian Presidential Office at the time of the Crisis.
And Mr. ALMANN was also in charge of the Crisis as the Secretary General of the Estonian Defence Ministry at that time.
Now in Estonia, “NATO Cooperative Cyber Defence Centre of Excellence (CCDCOE)” has been set up, and “Locked Shields”, cyber security exercises, have been conducted every year in spring since 2010.
Precious expertise of “Locked Shields” has been accumulated in “CybExer Technologies”, and under a contract with them, it is possible to experience the exercise like “Locked Shields” in a customized manner, following the various requirements of each client.
Already, governmental organizations and private companies of various countries like the United Kingdom, Netherlands, Spain and Portugal, experienced the exercises conducted by “CybExer Technologies” under a contract with them.
The Ambassador experienced the exercises on their screen, where “red team”, hackers organized by “CybExer Technologies”, makes a mock attack against “blue team”, organized by a customer, who made a contract with “CybExer Technologies”.
It was impressive for the Ambassador that their exercise is not only technological, but also strategic, engaging the political leaders or the management of companies, training them how to make proper decisions facing cyber crises.
The Ambassador said, “on 1st September, the Digital Agency was set up in Japan. With the acceleration of digitization, it will become more and more important for the Japanese public and private sectors to cope with the new crises of cyber attacks. I hope the exercises of “CybExer Technologies” shall come to be conducted in both of public and private sectors in Japan”.
Those who are interested in their exercises, please refer to their following website;
https://cybexer.com
The Ambassador would like to express his sincerest gratitude to Mr. SAKS and Mr. ALLMAN for accepting him in such a cordial manner under COVID19!