The Japan Estonia Friendship Association (JEFA) held the online cerebration for the 30th Anniversary of Restoration of Independence of Estonia & the 100 years of Friendship between Estonia & Japan. Ambassador KITAOKA attended to deliver a speech 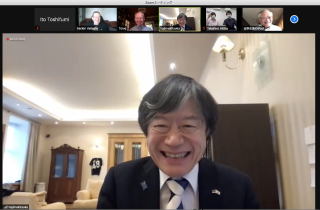 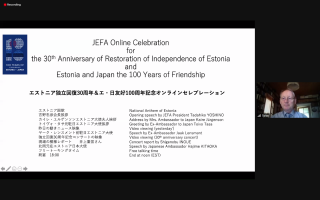 Program of the online celebration
On 21st August, the Japan Estonia Friendship Association (JEFA) held the online cerebration for the 30th Anniversary of Restoration of Independence of Estonia and the 100 years of Friendship between Estonia and Japan!
The honorable Chairman of JEFA is Mr. Tadahiko YOSHINO, and the Secretary General is Ms. Hideko ARAI, who so kindly extended her invitation to the Ambassador Hajime KITAOKA to deliver a speech.

The cerebration proceeded, chaired by Ms. ARAI.
It started with the singing of the Estonian national anthem, which was followed by the speech by Mr. YOSHINO, and the greetings by Mrs. Ambassador to Japan, Kaire JÜRGENSON and H.E. Mr. Toivo TASA, the former-Ambassador to Japan.
After the showing of the news film reporting 20th August, the previous day, which cerebrated the 30th Anniversary, a speech was delivered by H.E. Mr. Jaak LENSMENT, the ex-Ambassador to Japan.
After the film showing, reporting the memorial song festival for the 30th Anniversary on the previous day, Associate Prof. Shigenobu INOUE reported the festival based on his experience of actually attending the festival.
Then came the speech by the Ambassador KITAOKA.
25 years ago, he acted as the deputy head of the Japanese Embassy in Finland, and sometimes visited Tallinn, the Capital City or Tartu to support the Japanese Embassy in Estonia without the Ambassador Extraordinary and Plenipotentiary at that time.
He told how much he was astonished by encountering Tallinn again on 1st October 2019, when he came back to take the office of the Ambassador.
The center of Tallinn has changed its appearnace with so many fresh buildings, and he had to ask an Embassy staff escorting him “am I really in Tallinn?” even twice!
Eventually, he was convinced that he was actually in Tallinn after visiting the old town of Tallinn, where nothing changed, in the weekend!
The Soviet Union’s annexation for half a century gave serious damage to the Estonian economy, and its GDP, which once surpassed that of Finland, fell down to only one eighths of the Finnish GDP.
However, Estonia managed to make a miraculous economic recovery under the distinguished leaders including the ex-President, ILVES, who promoted the rapid digitization of Estonia.
But the Ambassador KITAOKA said “the real reason for the miraculous economic development is not the digitization, but the Estonians themselves, who have never never lost their tradition, culture and language under 700 years of domination by big powers and half a century of annexation by the Soviet Union”.
He introduced the episode of Ms. JÜRGENSON.
Once Ambassador KITAOKA asked her the reason why the Estonians could maintain their tradition, culture and language under such hardships, and she answered “because we are stubborn”.
The Ambassador finished his speech by saying “I have made many Estonian friends, and all of them are really stubborn, which I love so much! I sincerely wish for the Estonians continuing to be stubborn, and continuing to attain further prosperity”.
It was followed by free talking time.
Talks by Ambassador’s friends, Ms. Taimi PAVES, who is always devoted to the Estonian-Japanese friendship, and Dr. Ene SELART, a known expert of Japan study in Estonia were interesting as usual.
And on top, talks by the members of JEFA, who devoted themselves to the bilateral friendship since before the restoration of Estonian independence were very precious for the Ambassador.
The attendance at this occasion gave the Ambassador indeed a lot to learn.
He would like to express his sincerest gratitude to Ms. ARAI for her kind invitation! 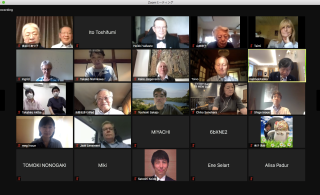 Participants to the celebration 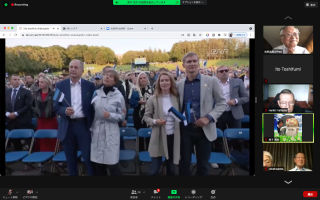