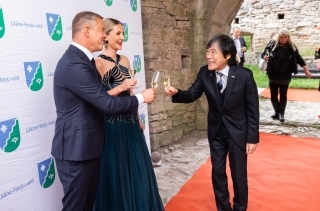 The Ambassador was welcomed by Mr. SAAT and Ms. TAMMUR 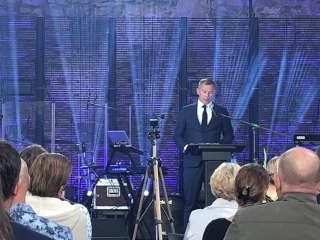 The Ceremony took place at Padise Monastery, which was founded in the 14th century, wearing beautiful medieval atmosphere.
The Ambassador, together with the other guests, was warmly welcomed by Mr. SAAT and Ms. Külli TAMMUR, the Chairperson of the Municipality Council.
All the guests moved into the courtyard for the reception, where the Ambassador made a reunion with Ms. Ester TUIKSOO, CEO of Paldiski Association of Entrepreneurs, who kindly hosted lunch for the Ambassador during his 1st visit, and held a seminar during his 2nd visit.
Ms. TUIKSOO and the Ambassador cerebrated the remarkable success of the Estonian athletes at the Tokyo Olympics!
Then all the guests moved into a church in the Monastery and took seats.
The singing of the national anthem was followed by speeches by Ms. TAMMUR and Mr. SAAT and a concert.
The Ambassador thoroughly enjoyed the chorus, which was so purified in an Estonian manner, together with rich acoustics of the church.
He reflected upon the 30 years after the recovery of the Estonian Independence, which should have been truly a long hard climb.
And he congratulated all the Estonians, who have attained the present prosperity overcoming those hardships, from the bottom of his heart.
The Ambassador would like to express his sincerest gratitude for Mr. SAAT for his kind invitation to such a memorable occasion! 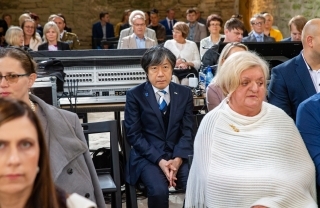 The chorus together with rich acoustics of the church 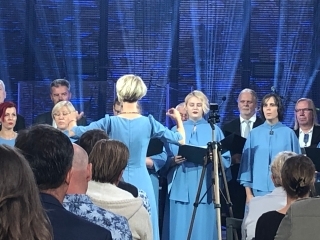 The chorus purified in an Estonian manner