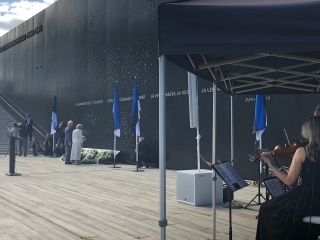 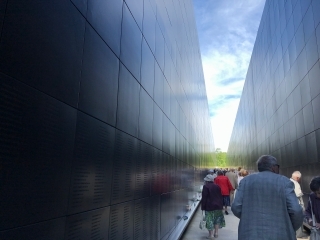 Many participants remembered the ordeal suffered
On 14th June, Ambassador KITAOKA visited “Memorial to the Estonia’s Victims of Communism, 1940-1991”, which is located at Maarjamäe in the suburbs of Tallinn, the capital city.
The purpose of the Ambassador’s visit this time is to attend the ceremony for “80th Anniversary of Soviet Mass Deportations of Estonians”.
On this day of 14th June in 1941, 10,205 Estonians were deported to Siberia by rail wagons for carrying livestock, forcibly without any judicial trials.
At the ceremony, participants including the President KALJULAID, the ex-President ILVES, and H.E. Mr.JANSONS, the Dean of Diplomatic Corps and the Ambassador of Latvia, laid flowers after delivering speeches.
Ambassador KITAOKA remembered the ordeal suffered by the deported Estonians together with all the other participants.
For the Ambassador, this visit to the Memorial is the second, following his first visit in February last year.
The visit this time again has become very precious occasion for the Ambassador to deepen his understanding of the history and the people of Estonia.