Top > Ambassador KITAOKA made his 10th official visit to Tartu, the center of the Southern Estonia (1st Instalment: Visit to Jaan Poska Gymnasium)

Ambassador KITAOKA made his 10th official visit to Tartu, the center of the Southern Estonia (1st Instalment: Visit to Jaan Poska Gymnasium) 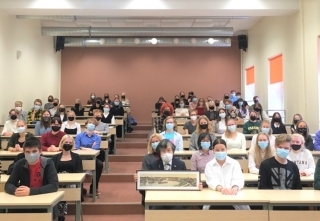 Together with the students who listened to the lecture A meeting with students studying Japanese language
From 13th to 14th October, Ambassador Hajime KITAOKA made his 10th official visit to Tartu, the center of the Southern Estonia.
He was escorted by Mr. Toshifumi ITO, a Second Secretary in charge of culture and public relations in the Japanese Embassy.
The Ambassador, who left Tallinn, the Capital City, a bit over noon, headed for the south for 2 hours and 15minutes by car to get to Jaan Poska Gymnasium in Tartu, his first destination.
The building of this Gymnasium is one of the most important historically.
This is exactly the place, where Tartu Peace Treaty was signed with the Soviet Union on 2nd February 1920, to confirm the Estonian independence after 2years of Independence War, which was full of hardships.
The Treaty was signed by Jaan POSKA from the Estonian side, which is the reason why the Gymnasium is carrying his name.
The lecture at this famous Gymnasium has been the Ambassador’s wish since he took his office 2 years ago, which has got materialized eventually this time!
He was welcomed by Ms. Mari ROOSTIK, the Director, who guided him into the lecture hall, where students already took their seats.
The Ambassador gave a lecture entitled “Japan, Island Country, which is so mysterious” to them to introduce Japan.
In his lecture, the Ambassador said “the common knowledge says that Japan is a homogeneous country. On the contrary, Japan is full of varieties, because of its geography, where the nation is divided by so many rivers and mountains. If you have a chance to visit Japan, please try to visit as many different places as possible to feel this variety”.
He further discussed that Japan has been suffering the decline of its population, and its economy has been sluggish, which makes its digitization more and more important and urgent to overcome those problems.
He concluded his lecture, stressing the importance for Japan to learn a lot more from Estonia, the most digitized country.
The Ambassador was so much impressed by the students, who paid a lot of attention to him, together with their questions posed to him in such good English!
Thereafter, Ms. ROOSTIK guided the Ambassador into the room, where Tartu Peace Treaty was actually signed.
A monochrome picture on the wall shows the delegations of Estonia and the Soviet Union, taking seats for the Tartu Treaty negotiation, which reminded the Ambassador of one of the most important historical moments for Estonia.
It was followed by his meeting with students, who are studying Japanese language, and their teacher, Ms. Eri MIYANO, who is also teaching Japanese in Tartu University.
Those students, one by one, explained to the Ambassador why they have come to be interested in Japan enthusiastically, which pleased him a lot!

The Ambassador would like to express his sincerest gratitude to Jaan Poska Gymnasium, headed by Ms. ROOSTIK, and to all the students who so kindly listened to his lecture!