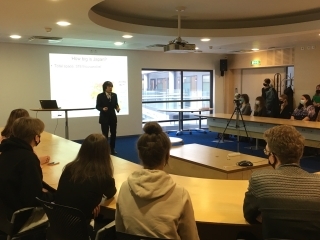 “Commemorative Lecture of the 100 years of Friendship between Estonia & Japan”

Together with the participants
On 11th October, Ambassador Hajime KITAOKA gave “Commemorative Lecture of the 100 years of Friendship between Estonia and Japan” after visiting the Japanese language class by Ms. JUURIKAS.
From the Japanese Embassy, Ms. Yuki SAKAI, the Counsellor (Deputy Head of the Mission), Mr. Toshifumi ITO, a Second Secretary, and Ms. Made Leene TRUU in charge of culture and public relations attended.
It was the Ambassador’s sincere with since he took his office two years ago, to give lecture to introduce Japan at the Tallinn University, which is one of the universities representing the Estonian academia.
His lecture at Tallinn University was agreed to be arranged between the Ambassador and Prof. Tiit LAND, the Rector at that time, as early as in January last year, when the Ambassador paid his courtesy call to the Rector.
It was forced to be postponed because of COVID19, but it has eventually materialized in this auspicious year, when Estonia and Japan are cerebrating the 100 years of Friendship!
The Ambassador started his lecture following the introduction made by Ms. JUURIKAS.
He, by using the power point presentation, discussed the Japanese geography which has created the diversity of Japan, its history created by that diversity, the importance of digitization to find a breakthrough in stagnant Japanese economy, the importance of the friendship between Estonia and Japan for that breakthrough etc. together with his episode on Tallinn, which he visited 25 years ago.
Finally, he said, “The next 100 years has a wonderful momentum to deepen our bilateral relationship, far deeper than that in the last 100 years”.
He finished his presentation, expressing his sincerest expectation for the future relationship between Estonia and Japan.
It was followed by the question and answer session, and the Ambassador answered the questions enthusiastically posed by the audience beyond the scheduled time.
The lecture finished with a photo session in such a friendly manner.
The Ambassador’s wish for the lecture at the University of Tallinn since January last year has been eventually materialized, which made this lecture truly a memorable one for him.
He would like to express his sincerest gratitude to the audience, who gathered under COVID19, and to Ms. JUURIKAS, who acted as such an excellent moderator!