Ambassador KITAOKA had a meeting with Japanese Government Scholarship Students 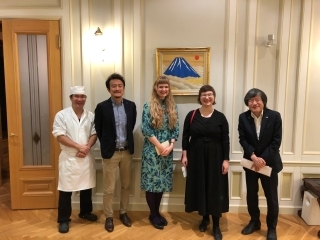 Together with Ms. Laul and Ms. Bome 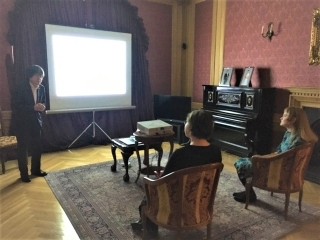 Presentation by the Ambassador
On 10th September, Ambassador KITAOKA invited to his residence Ms. Johanna BOME and Ms. Eliis LAUL, who are scheduled to visit Japan next month as 2021 Japanese Government (MEXT) Scholarship Students, and had a meeting.
From the Embassy, Mr. Toshifumi ITO, a Second Secretary in charge of culture and public relations accompanied.
Those two students, after their arrivals in Japan next month, will study Japanese language until March next year.
Then Ms. BOME, who is now teaching history at a gymnasium, is scheduled to study pedagogy at Osaka Kyoiku University, and Ms. LAUL is scheduled to study photography at University of Tsukuba, respectively for one year.
The meeting started with the Ambassador’s power point presentation entitled, “What is Japan? Mysterious Island Country” as an orientation of Japan to those two students.
A dinner followed in a dining room, fully ventilated, and each participant took a seat keeping distance with each other.
All the participants enjoyed conversations over the authentic Japanese cuisine, cooked by Mr. Takaaki ARAI, the official chef of the Ambassador, who recently received “2021 Foreign Minister’s Commendation as Excellent Executive Chef for Ambassador of Japan”.
The Ambassador said, “common knowledge says that Japan is homogeneous. On the contrary, Japan is full of diversity, because of its geography with so many mountains and rivers, dividing the country. Therefore, I sincerely wish that both of you could venture out to visit as many places as possible in Japan to fully enjoy its diversity”.
The two students told many expectations and ambitions for Japan to the Ambassador and Mr. ITO!
The meeting finished in such a friendly manner with a photo session.
The Ambassador and Mr. ITO sincerely wish that the stay by Ms. BOME and Ms. LAUL in Japan could be a very happy and fruitful one!