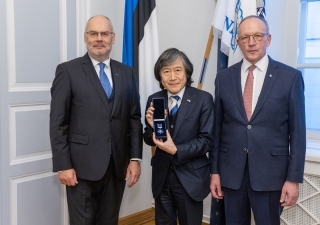 Together with the President KARIS and the Rector ASSER 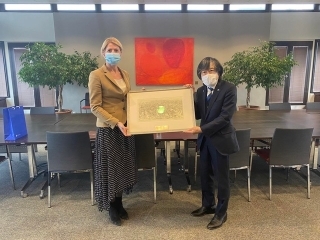 Together with the Foreign Minister LIIMETS
On 9th November, Ambassador Hajime KITAOKA left Estonia, completing his term of 2 years and 1 month.
It was too short for him, and he feels it even shorter because of the various restrictions caused by COVID19.
However, at the same time, he feels his term was so much enriched by various supports and encouragements, so kindly and generously given to him by his Estonian and Japanese friends, who share the ambition to promote the Estonian-Japanese friendship further with him.
After returning to Japan, his retirement is waiting for the Ambassador, putting a period to his life as a diplomat and a bureaucrat, which has lasted for 42 years.
Estonia has made the Ambassador addicted to it (!), and has become his most favorite country in his diplomatic life！
While wearing the rich historical atmosphere dating back to the middle ages, vast cyber space is spreading behind it, which is covered by close-knit computer networks, materializing the world most advanced digital nation.
Once you notice this extreme mismatch, it is too late to prevent yourself from falling in love with Estonia!
While enjoying his life here, the Ambassador has started getting convinced that Japan could learn a lot more from Estonia.
Japan has been suffering from its stagnant economy and society in the last 30 years.
And the Ambassador’s conclusion is that digitization, of which Estonia has achieved masterly, could give a solution to Japan.
In a digitized organization, information could be shared horizontally and vertically at once, which encourages notices or discoveries of the members, and could lead to the review or the creation of their strategies.
Indeed, the digitization could be an antidote against the excessive bureaucracy, both in private and governmental sectors in Japan.
There are so many pro-Japanese Estonians, and more and more Japanese have come to be attracted by Estonia.
But it is the Ambassador’s sincere wish that the number of the Japanese who could have deeper understanding of Estonia could increase in future.
This year is celebrating the 100 years anniversary of friendship between our two countries.
And what is in store for the next 100 years?
The Ambassador has conducted “intelligence studies” in the past as an expert, and their latest frontier says “you can never predict the future. You can only prepare for the future”.
Still the Ambassador is convinced that in the next 100 years, our bilateral relationship shall be promoted much further.
The Ambassador decided never to stop despite COVID19, and has continued to run forward for the sake of our friendship.
It has become possible only because of his friends in Estonia and Japan, who so kindly accepted him and run forward together up until the last moment of the Ambassador’s term.
He would like to express his sincerest gratitude to all of them, and now he retires, dreaming of someday when he could come back to Estonia, his beloved country.
Many many thanks to you all! 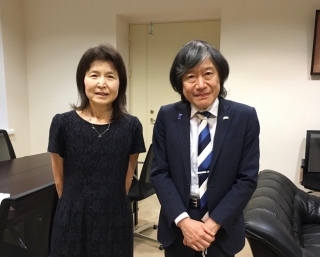 Many thanks to you all!！