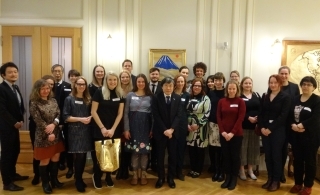 Together with the members participated 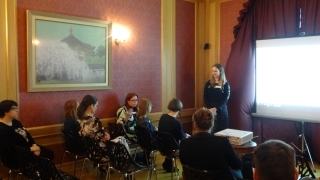 Constructive discussion at annual meeting
On 12th March, “Estonian Association of Former University Students of Japan”,which was founded in 2014, held the Annual Meeting at the Japanese Ambassador’s official residence.

22 members gathered together, and the election for three board members, including the President, took place. Ms. Anni Kagovere was re-elected as the President to continue her duty for the second term. Concerning the other two board members, Ms. Siiri Noska was re-elected. Ms. Hetti Meltsas, who finished her third term, was replaced by Ms. Eva Liias. Many thanks for Ms. Meltsas for her duty in the past three years!

Following the Annual Meeting, the participants enjoyed the power point presentation by Ambassador Kitaoka entitled “Japan and the Emperor”. It was followed by the proposition of the toast with Ambassador’s remarks.

He said to all the participants, “in order to promote the Estonian-Japanese friendship, it is you, who are playing the leading roles, while diplomat’s roles are only subordinate. That is exactly the reason why I am determined to give you our utmost help!”.

Then the participants, joined by Embassy staff, enjoyed conversations with Japanese dishes cooked by Mr. Takaaki Arai, the official Chef of Ambassador.