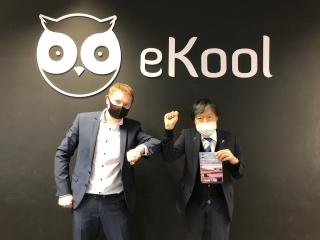 With Mr. Tanel KERES, the Managing Director of eKool 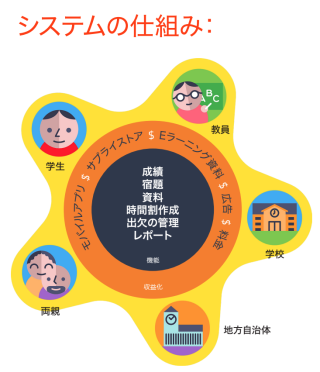 Concept of the eKool system
On 7th May, Ambassador KITAOKA visited the headquarters of “eKool (meaning e-school)” located in Tallinn, the capital city.
The company has been delivering globally its software to reduce the amount of labor of school teachers, to improve the communication between teachers and parents, and to analyze the performance of pupils.
The Ambassador was escorted by two Embassy staff, Mr. Tomoya SHIGENARI, a Second Secretary in charge of economic affairs and Mr. Hiroshi TAKENAKA, Researcher.
They were briefed by Mr. Tanel KERES, the Managing Director, on the details of his company’s software.

The “eKool” originated from a pilot project of “Look@World Foundation”, and was turned into a company in 2005.
Its software enables the closer communication among teachers, school, local governments, pupils, and parents.
On top, the software automatically deals with administrative jobs on behalf of teachers, who could concentrate more on education itself.
70% of all the educational organizations in Estonia have introduced this software, as the result of which, various fruits are born.
For example, teachers’ administrative jobs have been reduced by 50%, pupils’ absentee has been reduced by 30%, and pupils’ dropouts have been reduced by 80%.
Now the number of this software users has reached 2.5 million in 8 counties.
In Japan also, there is a project to introduce this software as an experiment.
Ambassador KITAOKA said, “the Japanese education sector is now facing the serious problem of the lack of teachers. Therefore, this “eKool” software has a big potential to proliferate in Japan”.

The leaflet introducing the “eKool” software is downloadable from here;

Also, if you have any questions or you would like to try it in your school, you can contact eKool directly with the e-mail address: japan@ekool.eu