Ambassador KITAOKA invited the Editor in Chief of “Postimees” 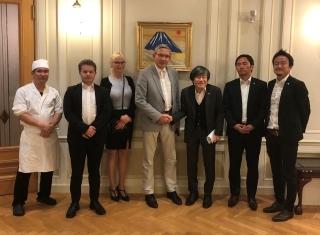 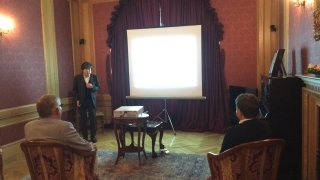 Presentation by the Ambassador
On 8th September, Ambassador KITAOKA invited to his residence Mr. Mart RAUDSAAR, the Editor in Chief of “Postimees”, the most renowned newspaper in Estonia, and enjoyed conversations over dinner.

The meeting started with the Ambassador’s power point presentation, entitled “What is Japan? Island Country, so mysterious”.
It was followed by authentic Japanese dinner, cooked by Mr. Takaaki ARAI, the official chef of the Ambassador, and all the participants exchanged their views extensively on the domestic situation in Estonia, the relationship between Estonia and Japan, and international situation.

This dinner turned out to be a very precious occasion for the Ambassador to learn a lot from knowledgeable staff of the “Postimees”, headed by Mr. RAUDSAAR.