Ambassador KITAOKA laid a wreath for the Estonian citizens in Tallinn, who lost their lives by the Soviet bombardment in 1944 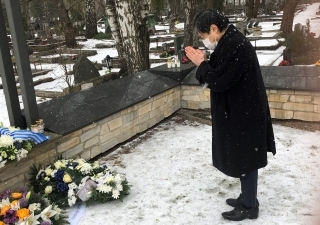 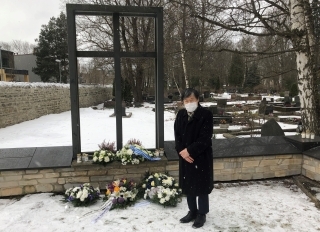 Wreath laid, wishing rest in peace
9th March, 1944 is to be remembered as the day, when the Air Force of Soviet, which was engaged with Germany, threw over 3000 bombs to the living quarters of Tallinn under the occupation of Germany.
Many Estonian civilians were killed.
Every year, the commemoration service and concert were held, but they were cancelled this year due to COVID19, and a small open-air service took place together with the bells of Tallinn churches, tolled in the evening at 7:15 for the memorial.

On this day, with snow falling, Ambassador KITAOKA visited the Monument for the victims of the bombardment in the Tallinn Inner-city Cemetery.
He laid the wreath, expressing his deepest condolences to the victims, wishing that their souls rest in peace.

Monument for the victims