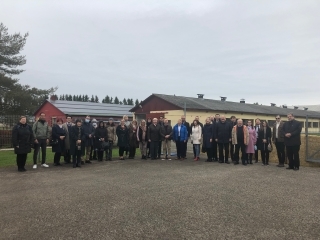 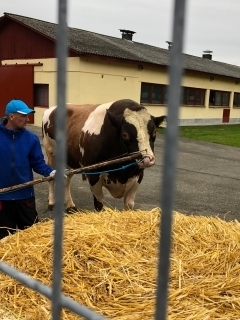 The theme of this year's tour is “Estonian milk and milk products”
From 21st to 22nd September, Ambassador KITAOKA, with the invitation of the Ministry of Rural Affairs, joined a study tour to inspect the agriculture in Estonia.
He was accompanied by Mr. Tomoya SHIGENARI, a Second Secretary in charge of economic affairs in the Japanese Embassy.
This tour to introduce Estonian agriculture has been conducted every year for the members of the diplomatic corps, but it was cancelled last year because of COVID19.
However, it has been recovered this year by introducing 2 buses to secure enough space for the participants.
The theme of the tour, chosen for this year, is “Estonian milk and milk products”.
Estonian milk products, especially cheese, are so well known for its exquisite taste, whose export to Japan has increased 6 times in the past 5 years.
Therefore, the Ambassador has been very much looking forward to this tour!
In the early morning on 21st, the Ambassador, together with his diplomatic colleagues, departed Tallinn, the Capital City.
After heading for the south for 1 hour, he has arrived at the 1st destination, “Animal Breeders’ Association of Estonia”, located at Kehtna in Rapla County.
This Association, founded in 1993, has been combining Estonian breeders of dairy animals to improve the breeds of various kinds.
The participants were briefed by Mr. Tanel-Taavi BULITKO, the Chairman.
It was followed by the introduction of various breeds of cows, starting from the genuine Estonian without horns to the ones with breed improvement, which were introduced one by one to the participants like fashion show!

Then the participants headed for the south east for 45 minutes to visit “Väätsa Agro” located at Türi in Järva County.
The company owns the biggest facility in Estonia to raise 2,450 milk cows.
The participants were briefed by Mr. Lenno LINK, President, which was followed by the introduction to the cows, which are, one by one, pushed on the big turn table rotating slowly, to be milked automatically by machine.
The facility is so well organized, sticking to the utmost efficiency, which looked very much Estonian, and pleased the Ambassador a lot! 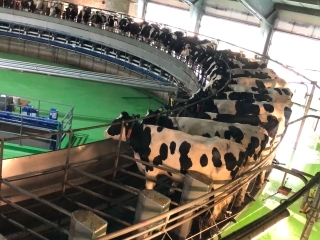